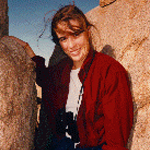 Nonlinear Dynamics in Modelocked lasers: Recent work in a number of ultrafast laser systems has revealed unexpected dynamics modifying the temporal characteristics of the pulse trains. In particular, in our work with Sodium Chloride lasers we have found a progression with increasing Kerr nonlinearity from a smooth pulse train, in which all pulses are identical, to a period doubled pulse train, in which pulses alternate in between high and low intensities, to higher harmonic quasi periodic pulse trains. Analysis of the nonlinearities governing the temporal behavior in these systems has revealed that these modifications are in fact part of a well defined route to chaos. In our current work we are building a new ultrafast system which will enable us to study in detail both the temporal and spatial aspects of these nonlinear dynamics. In combination with theoretical modeling, these studies will allow new insight into the dynamics governing ultrafast laser systems, and in particular give a general description of the stability regimes of these systems which may replace the phenomenological approach which is currently being used. Dimensionality Dependence of Ultrafast Dynamics in Semiconductors Our ultrafast laser system will also be used to perform studies of the influence of confinement on carrier dynamics in III-V and II-VI semiconductor systems. Particular emphasis will be placed on the effects of exciton structure on energy relaxation and dephasing dynamics in these systems.

The fall 2020 semester is underway, with strict health and safety protocols in place. All Williams College buildings are closed to the public and visitors until further notice.