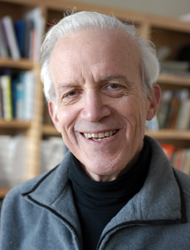 At Fall Convocation the College awarded Daniel Kleppner ’53 a Bicentennial Medal, which honors Williams alumni for distinguished accomplishment in any field.

Kleppner, the Lester Wolfe Professor of Physics, Emeritus, at M.I.T, won the National Medal of Science in 2006 for “his pioneering scientific studies of the interaction of atoms and light including Rydberg atoms, cavity quantum electrodynamics, quantum chaos; for developing techniques that opened the way to Bose Einstein Condensation in a gas; and for lucid explanations of physics to non-specialists and exemplary service to the scientific community.”

Kleppner delivered the keynote address at Convocation, reflecting on his student years at Williams.