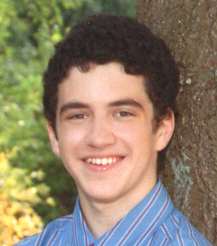 Congratulations to physics major Ben Augenbraun ’15 who was named a 2014 Barry M. Goldwater Scholar.  The U.S. Congress established this highly competitive national scholarship “to encourage outstanding students to pursue careers in mathematics, the natural sciences, or engineering and to foster excellence in those fields.”  It is widely recognized as a top honor for undergraduate science students in the United States.  Three Williams students won Goldwater Scholarships this year.