Set up the hanger as shown in the picture using metal poles. Hang the monkey in the hanger. Set the launcher angle so that the laser pointer hits the monkey. Load the launcher with the projectile ball.  Switch the button in the box to arm. Shoot the monkey by pulling the string in the launcher. 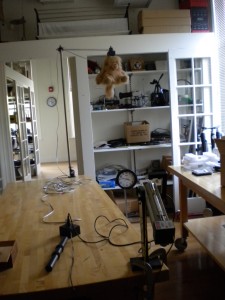